Large-scale ocean circulations can be sensitive to relatively small regions where there is intense mean current, significant air-sea interaction, and thermodynamic water mass transformation. One such high-energy region lies east of the northern US and Canadian coasts (indicated by a yellow box in Fig. 1). Here, the Gulf Stream extension along with the eastward-flowing slope-water current splits into three branches, including i) the inertial recirculation gyres north and south of the Gulf Stream; ii) the basin-filling subtropical gyre, and iii) the North Atlantic Current (NAC) as the northward limb of the Atlantic meridional overturning circulation (AMOC). Inshore and beneath the NAC, the southward flowing western boundary current along the Labrador Coast also splits into multiple branches, including: 1) some retroflects northward and then eastward as the subpolar gyre, 2) some shelf water flow around the Grand Banks and westward into the North Atlantic Bight, and 3) the North Atlantic Deep Water (NADW) continues its equatorial journey as the lower limb of the AMOC. The unique location of this transition region as a meeting point for both the subtropical-subpolar gyres and the upper-lower AMOC branches has been recognized for many years (e.g., Iselin, 1936; Worthington, 1976; Rossby, 1996). However, as summarized in Lozier (2010), it remains unclear how water in both the upper and lower limbs of the AMOC flows through this complex region before entering the subpolar and subtropical regimes. In this project (NSF award # 1537136), we are systematically investigating the upper and lower layer circulation that connected to transition region, using high-resolution numerical models, together with observations.

The impact of horizontal resolution on Gulf Stream Separation, Penetration, and Variability. Three nearly identical simulations with horizontal resolution of 1/12°, 1/25°, and 1/50° is used to investigate the separation, penetration, and variability of the Gulf Stream (Chassignet and Xu, 2017). The results show that the representation of Gulf Stream penetration and associated recirculation gyres shifts from unrealistic to realistic when the resolution is increased to 1/50° and when the nonlinear effects of the sub-mesoscale eddies intensifies the mid-latitude jet and increases its penetration eastward (see the very wide range of eddy scale as illustrated in surface vorticity in Fig. 2). The study also shows that at 1/50° resolution, the penetration of eddy kinetic energy into the deep ocean is drastically improved and resembles the observations. The surface power spectra in the mesoscale range are representative of interior quasi-geostrophic (QG) and surface quasi-geostrophic (SQG) turbulence, independent of the horizontal resolution and of the latitude. 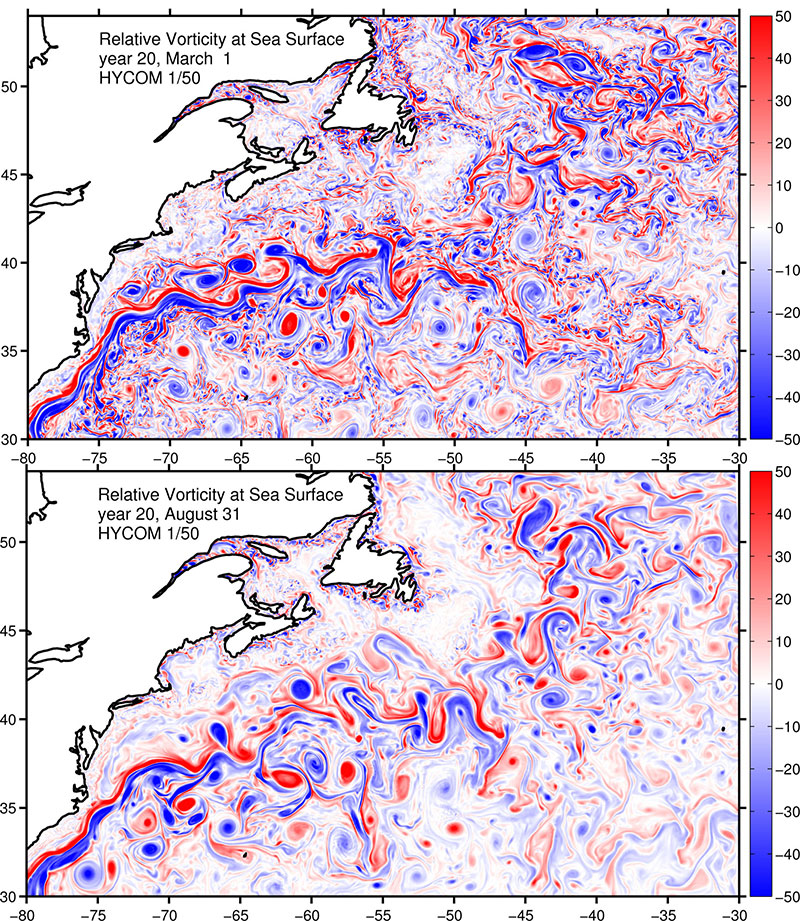 Transport variability of the Iceland-Scotland Overflow water in the Charlie-Gibbs Fracture Zone. Iceland-Scotland Overflow water (ISOW) is a key component of the North Atlantic Deep Water that flow southward in the Atlantic as the lower limb of the AMOC. Knowledge of the circulation pathway (schematic in Fig. 3) and its volume transport (including variability) associated with the ISOW is fundamental in understanding the AMOC. Two substantial ISOW observations are made at a critical location-the Charlie-Gibbs Fracture Zone, and both show very large temporal variability, with frequent reversals of the flow (Saunders 1994; Bower and Furey 2017). In a recent work, Xu et al., (2018 manuscript to JGR-Ocean under review) show that most of the observed variability can be reproduced in their high resolution simulation using the HYbrid coordinate ocean model (HYCOM) with atmospheric forcing (Fig. 3). The model results are then used to help understand the source of the ISOW variability and to put the observed variability into a larger scale context: the variability is most likely induced by fluctuations of large-scale east-west wind anomaly; the ISOW variability of the ISOW at the CGFZ does not come from the upstream source, and is anti-correlated with the variability of the southward transport along the eastern flank of the Mid-Atlantic Ridge. 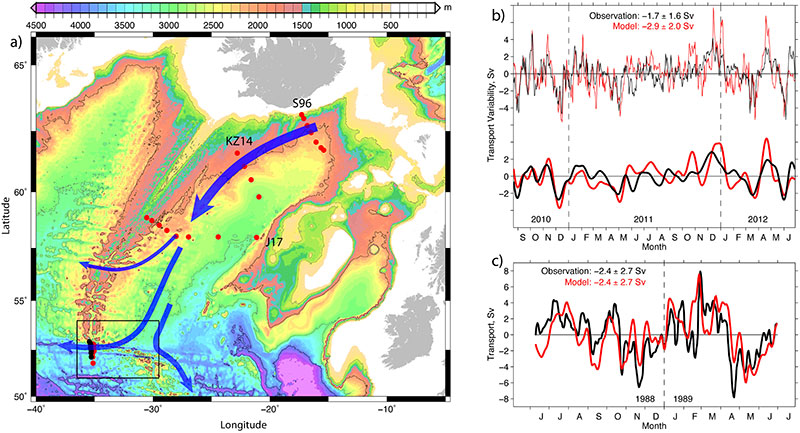 Figure 3: a) Schematic of Iceland-Scotland Overflow Water (ISOW) circulation in the Iceland Basin along with location of Key observations (The black box indicate the Charlie-Gibbs Fracture Zone); b-c) A comparison of the observed and modeled ISOW transport through the CGFZ in two periods 1988-1989 and 2010-2012.

For more information about this research, contact This email address is being protected from spambots. You need JavaScript enabled to view it.