Oil spills pose a serious threat to marine resources and can be highly destructive to nearby wetland and estuarine animal habitats. In order to limit the damage resulting from an oil spill and to facilitate efficient containment and cleanup efforts, response managers rely heavily on reports about a spill’s location, size and extent, as well as forecasts of surface oil locations. In the hours, days, and even months following any spill, information about surface winds and ocean waves is critically important to estimating the spill location and forecasting how the released oil will be transported. When dealing with large spills, floating oil can also substantially modify the wind and waves, which in turn modifies the movement of the spill. The prior work of Zheng et al. (1) used an idealized model to show that the above interactions between oil, wind, and waves substantially affected the oil’s motion; albeit with less impact than the strong currents associated with Gulf eddies. Numerical ocean and atmospheric models do not yet take into consideration these effects on oil transport. In this study, modifications of the Coupled Ocean-Atmosphere-Wave-Sediment Transport (COAWST) model (2) will account for these interactions under much more realistic environmental conditions and in a system that can ultimately be used to generate improved oil spill forecasts. 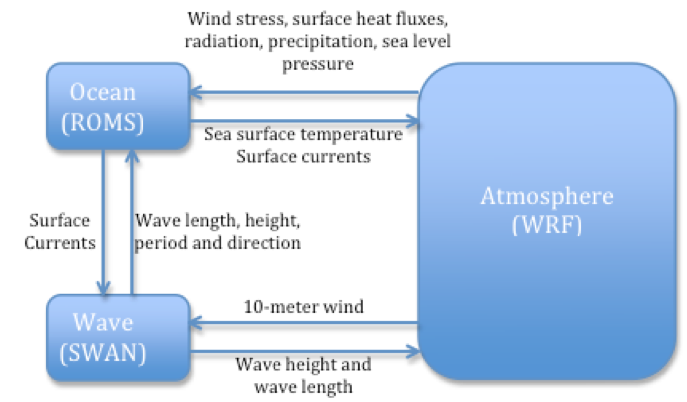 COAWST configuration and exchanged data fields. Our version of the model does not currently use the sediment transport, but COAWST easily allows the sediment model to be added and tuned to transport oil. The oil proactive influences on momentum and heat exchanges between atmosphere and ocean have now been taken into account in the modeling system.

Oil-related modification of the ocean surface will cause changes in surface winds and stress that will also modify waves and currents. This wave-induced transport is typically ignored in oil trajectory forecasts including the Deepwater Horizon forecasts (3). Such motion is already parameterized in some ocean models. However, a common practice in modeling oil spills is to make an adjustment in surface transport due to ‘wind drift,’ which includes an approximation for wave induced motion based on one specific set of conditions (4). Results from the Deep-C Consortium have shown that wave transport is highly variable. For example, distant strong wind events such as winter fronts or hurricanes can greatly increase wave-related transport. But while wave-related transport is smaller than transport from strong deep water currents; it is very important in shelf water and responsible for substantial shoreward transport. The modified COAWST model includes coupling with waves, making it well suited for including wave-related transport in a relatively realistic manner. The majority of the oil-related modifications has already been completed and tested for another project. An improved form of this model will be used to examine transport associated with tropical cyclones and winter fronts, as well as study how modified air/sea coupling changes this transport.

The idealized model for how oil modifies surface stress (1) assumed a surface entirely covered by oil; however, observations following the Deepwater Horizon accident indicate that the oil coverage after a spill is patchy. This patchiness can easily be added to the existing model in the parameterizations of wind stress and evaporation. As a reasonably accurate approximation, evaporation of water is negligible where there is a layer of oil, which appears to be the dominant process in changing the surface temperature in a slick (radiative properties have small changes). Observations during the Deepwater Horizon spill found temperatures could be 5 °C greater than surrounding water for patches of oil (5). The energy budget can be used to constrain estimates of fractional coverage: too much coverage will result in temperatures that are too great. The fully coupled feedback between the slick, ocean and atmosphere will require estimates of oil coverage and temperature changes and tuning through comparison to observed sea surface temperatures.

The coupled model will be used to model oil transport and coverage during the Deepwater Horizon spill, which will provide comparisons to observations. The modifications to the atmospheric and ocean model can be shared with the broader community and the modified coupled model will be a legacy of this project.