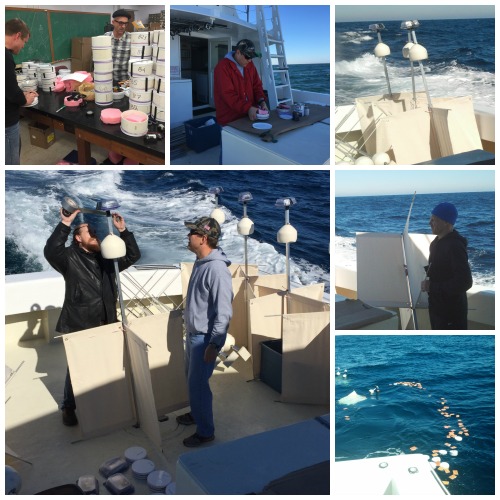 On January 24th, Drs. Steve Morey and Dmitry Dukhovskoy, and oceanography technician Caleb Hudson deployed a set of surface drifters offshore of Orange Beach, AL to test prototypes for a new drifter design developed by Dr. Nico Wienders, Associate Scientist in the FSU Department of Earth, Ocean, and Atmospheric Science. The deployment is part of a research project to develop new technology for observing currents at the ocean surface funded by NOAA and the Cooperative Institute for Marine and Atmospheric Studies (CIMAS).

The goal of the project is to develop the new drifter design for widespread use in observing systems, scientific studies, and practical applications.

“Typically, observations of surface currents are taken at one to several meters depth, which may not be representative of the true surface current,” says Steve Morey, a senior research scientist at COAPS and the project’s principal investigator. “The current at the very surface of the ocean is important for transporting buoyant materials (oil, fish eggs, etc.) and impacts air-sea fluxes.

Not only is the project developing new technology for measuring surface currents, it will also yield valuable information about the vertical structure of currents near the surface and differences in currents measured by different methods.

Self-addressed drift cards were also deployed for trajectory tracking via volunteer observers.  The drifters were programmed to transmit locations every five minutes via the Globalstar network so they are being tracked as they travel in the Gulf of Mexico (see how the drifters have traveled in the Gulf and where they are now). The deployment location was chosen as it lies within the footprint of a coastal HF (high frequency) radar site, which measures surface currents from roughly 2-3m depth.

(Top row, l-r) Drs. Steve Morey and Nico Wienders assemble the drifters in advance of the deployment cruise; Morey assembles the GPS unit that attaches to each drifter base; drifters ready for deployment.

(Large photo) Technician Caleb Hudson secures a GPS unit to a drifter prior to deployment in the Gulf of Mexico.

(Middle far right) Dr. Dmitry Dukhovskoy prepares to launch one of the drifters deployed on January 24, 2017.

(Bottom right) Self-addressed drift cards were also deployed for trajectory tracking via volunteer observers. These cards include instructions for those who find them to indicate where they were picked up, to further help scientists understand how ocean currents transport materials.