Ocean models are complex computer programs that simulate the physical state and dynamic properties of oceans. COAPS uses global and regional models to study processes, such as responses to storms, ocean circulation, and water mass formation, and to improve both short- and long-term forecasts. 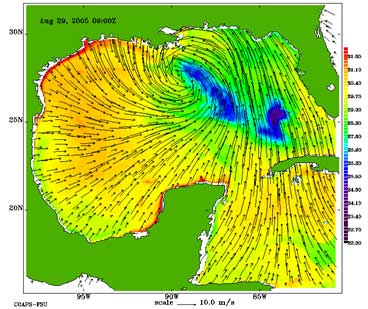 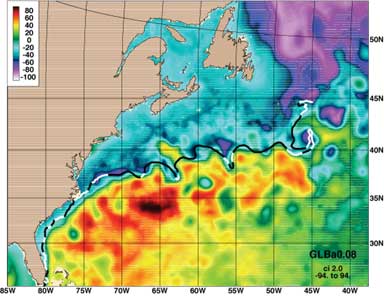 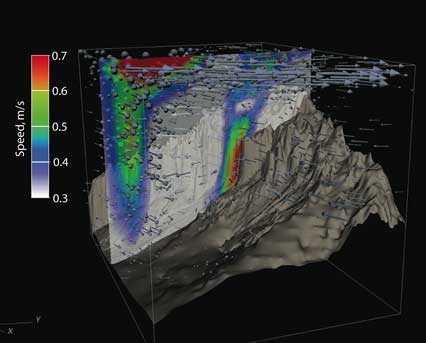 The simulated velocity of very strong deep currents in the Sigsbee Escarpment in the northern Gulf of Mexico using NCOM. 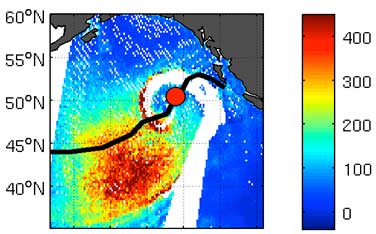 Fluxes of sensible and latent heat from a warm core seclusion are retrieved from adjacent satellite tracks.

Air-sea interaction focuses on the exchange (or flux) of quantities, such as heat or moisture, across the ocean surface. These exchanges are sensitive indicators of changes in climate, and are directly related to floods, storm surge, droughts, storm intensity, and storm tracks.The FSU in situ and satellite flux products provide ocean surface forcing fields which are well-suited for climate prediction studies.We are also improving air sea fluxes in a coupled model. 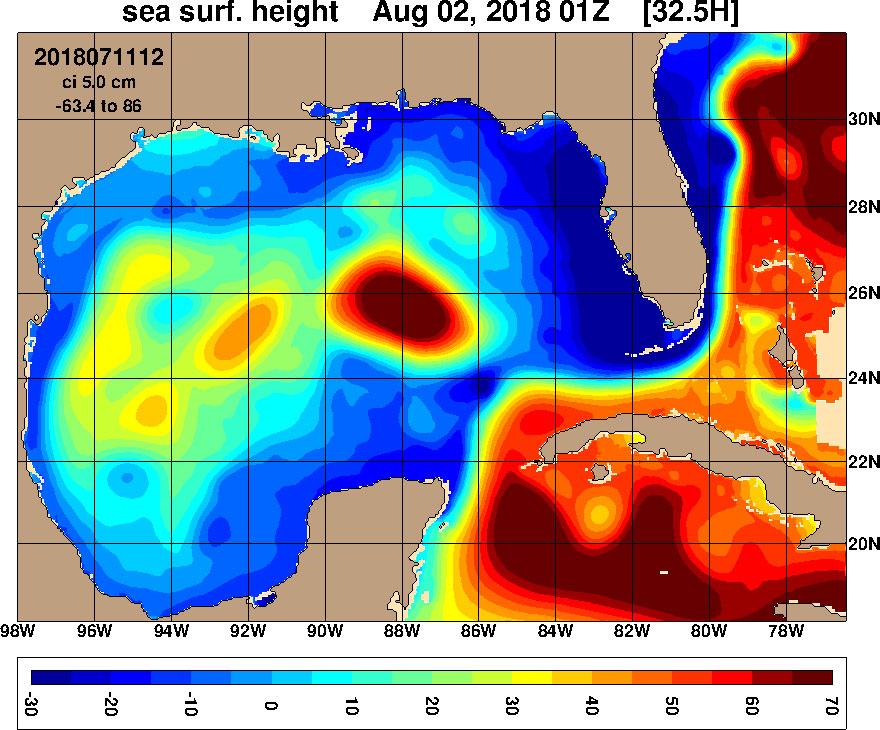 The above image is generated by HYCOM, a multi-institution (academic, government, and industry) collaborative effort focused on the depiction of the three-dimensional ocean state in near-real time.

COAPS is working with theNational Center for Atmospheric Research (NCAR)in building a new version of the Community Climate System model (CCSM) with the HYbrid Coordinate Ocean Model (HYCOM) as the oceanic model. With the CCSM being one of the flagship model in the climate research community, it is of great interest to investigate how the CCSM performs with an oceanic model that uses hybrid vertical coordinates instead of the conventional depth vertical coordinate. Comparisons will be performed between the new CCSM/HYCOM and the standard (CCSM/POP) version. After the validation of the new coupled model, experiments will be conducted to study both climate change (decades to centuries) and climate variability (seasonal to inter-annual). These experiments will include Intergovernmental Panel on Climate Change (IPCC) integrations as well as investigation of the response and feedback of the ocean to external climate forcing. 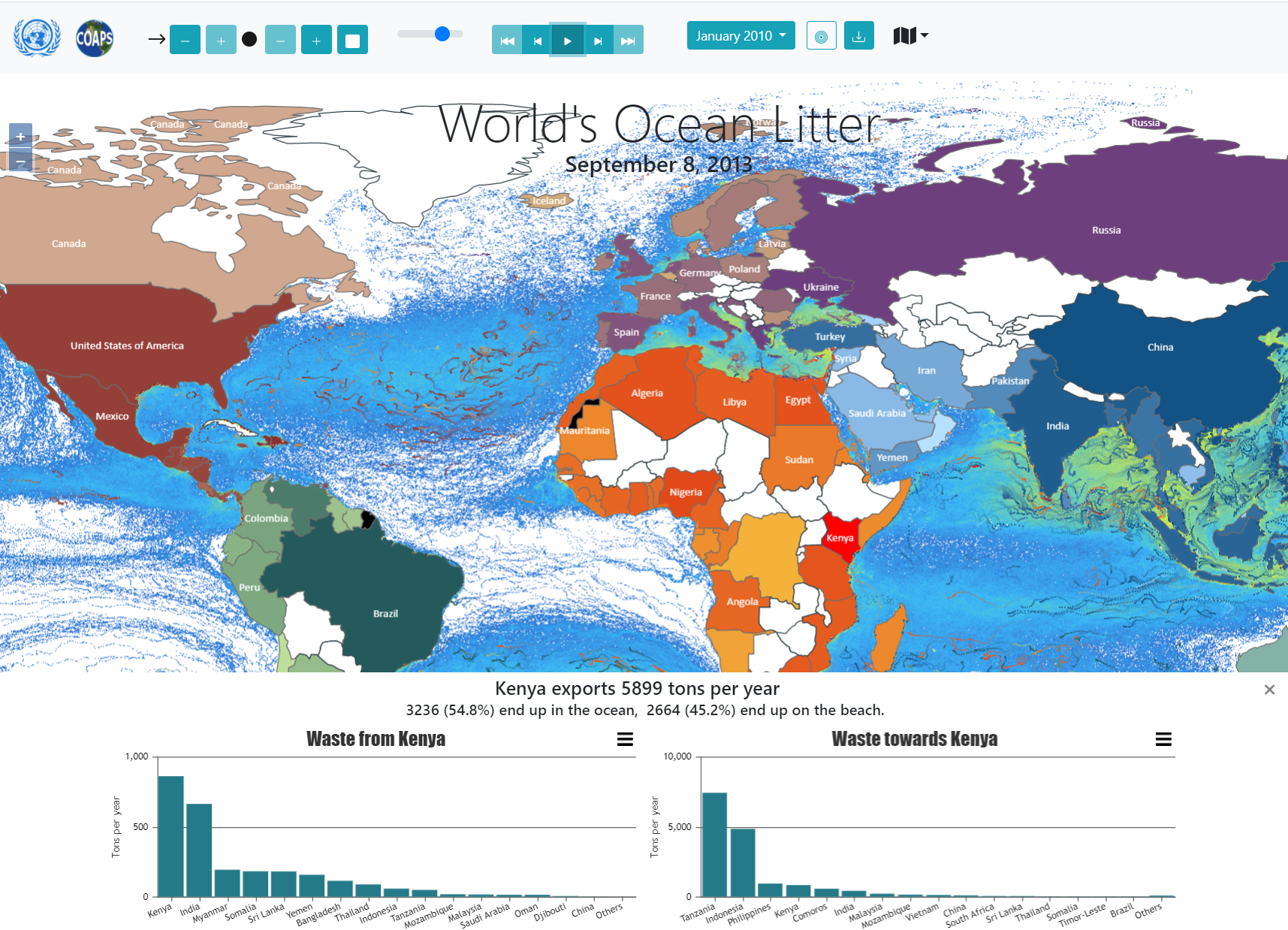 Snapshot of the web interface with statistics for Kenya.

Litter is found in all the world's oceans and seas, even in remote areas far from human contact due to its transboundary nature. The continuous growth in the amount of solid waste thrown away and the slow rate of degradation of most items are together leading to a gradual increase in marine litter found at sea, on the sea floor and coastal shores. It has become an economic, environmental, human health and aesthetic problem posing a complex and multi-dimensional challenge. Marine litter results from human behavior, whether accidental or intentional. 80% of marine litter comes from land sources and plastics are the most abundant type. It includes wastes released from dumpsites near the coast or river banks, the littering of beaches, tourism and recreational use of the coasts, fishing industry activities and ship-breaking yards. The major sea-based sources include, abandoned, lost, or discarded fishing gear, shipping activities and both legal and illegal dumping. In the global context, marine litter has become a priority area. The United Nations Environment Assembly (UNEA) has recognized marine litter as one of the top priorities through its three resolutions (from UNEA-1 in 2014 and UNEA-2 in 2016, and UNEA-3 in 2017) specifically calling for actions to combat marine litter. Marine litter has also been recognized in Sustainable Development Goal 14, and its targets and indicators. LEARN MORE about the COAPS Global Model of Marine Litter.